The health benefits of soy milk include reducing the risk of cholesterol, cancer, and obesity. It helps improve cardiovascular health and reduce the risk of many postmenopausal problems. The high protein and vitamin content of soymilk makes it a beneficial addition to a plant-based diet.

Soy is a legume from which many foods are made for regular diet consumption. Soy products replace many meat dishes and are popular with those who eat a vegetarian or vegan diet due to the high protein content.

Soy milk and other soy products are traditional products of Asian cuisine. Soy milk can also be used to make tofu which is a substitute for cheese.
The use of soy milk is said to have started in China in 82 AD. It is widely used in other Asian countries such as Japan and Malaysia. Today it is used all over the world and is readily available in various varieties across many countries.

Soy milk is extracted from soybeans. Many choose soy milk because of its versatility and ability to be used as a milk substitute in recipes. It is a good source of protein for people who are lactose intolerant. It is available in chocolate and vanilla flavours. In countries like China and India, some people also drink salted soy milk.

With the cost-effectiveness of soy and its growing popularity in diets around the world, research studies are beginning to look into the other health benefits of this natural plant product. 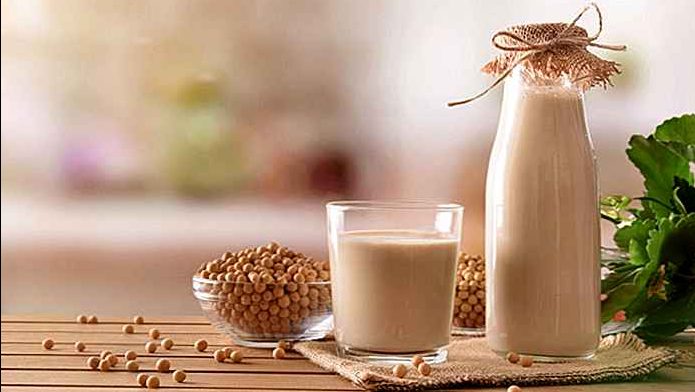 The nutritional value of soy milk can vary depending on whether it is fortified or not. Although the protein content in soy milk is comparable to that of cows, other nutrients may be of lower content, and vitamin and mineral fortification is common practice in commercial soy milk products.
Fortified soy milk is a nutritious milk substitute for people who follow a plant-based diet or have dairy allergies because it contains calcium and other vitamins. The protein content and isoflavones found in soy milk, both fortified and unfortified, are phytonutrients; have many benefits for preventive medicine. The nutritional value of soy milk products may vary between brands.

The health benefits of soy milk are as follows:

Soy milk contains essential proteins for growth. Proteins are made up of amino acids that have a beneficial effect on the prevention of various health disorders. The amino acid and isoflavone content of soy protein also helps lower LDL cholesterol.
Other studies have shown that the consumption of soy isoflavones reduces serum cholesterol levels in older men. Among type 2 diabetic patients, soymilk intake is associated with normal blood pressure. Thus, intake of soy milk is an effective way to improve cardiovascular health.

Soy milk is beneficial for relieving osteoporosis in postmenopausal women. Osteoporosis is a risk for women after the age of menopause.  Often referred to as brittle bones, the loss of calcium contributes to the risk of developing this disease.

Studies have shown that an animal protein diet increases urinary calcium excretion and the soy protein diet does not.
Since soy milk is increasingly fortified with calcium, soy milk can be said to help retain and supply supplements to the body.  Natural hormone replacement therapy with soy isoflavones may improve retention of bone mass and density, thereby reducing fracture risk in postmenopausal women.

According to a research study, consumption of soy milk can reduce serum estrogen levels and reduce the risk of breast cancer. Breast cancer is common in women and estrogen levels are associated with this type of cancer. In particular, postmenopausal women are at higher risk for breast cancer and often consume soy products, such as soymilk, for further estrogen replacement benefits. The results of a study also suggest that men with a high intake of soy milk have a lower risk of prostate cancer.

5. Acts as an antioxidant

Intake of soy milk, which is rich in isoflavones, helps reduce metabolic obesity in men as well as in postmenopausal women.  Apart from this, it helps in reducing the waistline in obese and overweight people. The hormonal effects of soy isoflavones work to inhibit adipogenesis, which reduces fat tissue enlargement.  Those who consume soy isoflavones may not only benefit from the adipogenic effect but also from the cholesterol-lowering effects that help treat and prevent heart disease.

In conclusion, the content of soy milk has many phytonutrients that have benefits against many chronic diseases, especially for the ageing population.  Soy milk is now often fortified with vitamins and minerals such as calcium.

Due to natural phytoestrogens, postmenopausal women seem to benefit most from consuming soy milk as part of their daily diet.

Soy isoflavones aim to reduce cardiovascular risk through its benefits of lowering LDL cholesterol levels and improving the cardiovascular blood flow as a vasodilator. It acts as adipogenesis and inhibits obesity.

Research shows that soy is highly beneficial, and results may vary depending on the quality and nutritional fortification of soy milk, the amount taken, and isoflavone absorption.